By Chris Hartshorn February 10, 2022 No Comments

Last week we looked at West Basin Water District in Southern California and examined how the District is charting its future amid historic drought and water supply challenges exacerbated by climate change. This week we are looking at another water district in Southern California, Yucaipa Valley, a muni with both drought and wildfire risk. We’ll look at the history of wildfires in the area and how the District is addressing worsening hazards.

About the District and the Bonds

The Yucaipa Valley Water District’s service area straddles San Bernardino and Riverside Counties and serves approximately 52,000 people with its water and wastewater system. The proceeds of this series will be used to finance certain capital improvements projects benefiting the Water System and to refund outstanding debt; the bonds are in turn secured by Net Revenues. Page 3 of the POS lists the District’s projects which include upgrades to their recycled water and filtration systems as well as water storage systems.

Yucaipa Valley’s service area ranks remarkably high in terms of property value-at-risk (VaR) from wildfire, ranking 100th percentile nationally and 98th percentile statewide for expected property losses from wildfire events. Its Wildfire risQ Score of 4.8 is largely driven by the area’s topography as Yucaipa Valley is surrounded by the San Bernardino National Forest. Many residential homes in the area extend into the wildland-urban interface, which is one of the reasons we see dramatic wildfire risQ here; we project that a 100-year fire would drive losses to 66% of property within the service area boundaries.

“The majority of the District’s service area, including areas where District facilities are located, are considered by the Department of Forestry and Fire Protection of the State of California (“CalFire”) to have an elevated risk of wildfires and have been mapped with the California Public Utilities Commission Fire Threat Map as either ‘Elevated’ or ‘Extreme’.” (pg 20)

Table 10 in the District’s Hazard Mitigation Plan names 19 fires that have occurred within Yucaipa Valley since 1987, with 4 occurring since 2019 (pg. 36). For example, the Apple Fire in 2020 burned over 30,000 acres and forced thousands in the region to evaluate while the El Dorado Fire in 2020—started by the infamous gender reveal pyrotechnic disaster—burned more than 20,000 acres near the District’s northeastern border.

“To help address this [wildfire] risk, the District has aggressively pursued wildland fire fuel reduction projects across its service area for many years in close partnership with local, state, and federal fire protection agencies to reduce the risk of wildfire to communities, and more specifically District facilities subject to wildfire risk.” (pg. 20) In terms of preventative measures, the District seeks to mitigate wildfire risk by creating a 25 foot vegetation clearance zone surrounding its facilities and retrofitting critical infrastructure with fire-resistant coating. (Hazard Mitigation Plan, pg. 57).

Unfortunately it’s not only wildfire risk that the District faces, but also drought risk. Under 2030 RCP 8.5 climate conditions — a greenhouse gas emissions scenario where emissions remain business-as-usual — we project 63% of months over a 30-year period will be classified as mild, moderate, severe, or extreme drought conditions; this percentage of months in drought ranks in the 94th percentile, nationally. We project that 13% of those months would be classified as severe drought and 23% would be extreme drought conditions.

“On April 1, 2015, for the first time in California’s history, the State Governor directed the State Water Resources Control Board to implement mandatory water reductions in cities and towns across California to reduce total water usage in the State by 25%… such restrictions applied to the District. There can be no assurance that prolonged drought conditions will not impact the District’s service area, leading to decreased usage of the Water System resulting in a decline in Net Revenues.” (pg. 20)

Unlike West Basin Water District (which, as we discussed last week, gets almost 90% of their water from imported sources), Yucaipa gets almost 60% of their supply from local sources: 40% from groundwater wells, 16% from recycled water, and the remaining ~44% is delivered via imported surface water (pg. A-12). The District’s ability to be self-reliant insulates them when drought conditions engender water restrictions on regional distribution, however, even the District’s local supply has come under threat recently.

In 2021, building on an inter-governmental relationship formed in 2007, Yucaipa Valley along with thirteen other agencies adopted the Upper Santa Ana River Watershed Integrated Regional Water Urban Management Plan (the “IRWUMP”) to meet the challenges of sustainability managing the water basin. The IRWUMP seeks to improve water supply reliability in the region by managing demands, increasing local supplies, increasing overall water storage, preparing for potential disasters, and managing climate change impacts (pg. A-17). Through this agreement, the agencies formed the Upper Santa Ana River Watershed Infrastructure Financing Authority (the “USARWIF Authority”), which is tasked with developing and implement infrastructure projects to modernize aging infrastructure and address issues facing the region and its Members, such as the impacts of climate change, drought and the need for cooperative water management. As of July 2021, the USARWIF has submitted letters of interest to the EPA to borrow up to $171 million to begin work on the proposed Watershed Connect projects.

Beyond regional efforts to increase water supply resiliency, Yucaipa Valley is undertaking local measures as outlined in their Hazard Mitigation Plan section on drought. Among the strategies, the District intends to use: construct more water storage capacity, drill more wells to increase groundwater capacity, and develop ways to capture rainwater from the higher elevations during flash flooding events and divert these waters to retention ponds to recharge the underground aquifers (Hazard Mitigation Plan, pg. 39). Aside from proactive measures, the District also has reactive measures in place through its Drought Contingency Plan which outlines different responses to water conservation under varying levels of drought conditions.

Conclusion
It’s clear that Yucaipa Valley Water District faces severe challenges stemming from wildfire and drought. The District ranks near the 100th percentile in terms of wildfire risk and has a lengthy rap sheet of wildfires in the area. It is also currently facing water supply challenges and we project that the region will face drought challenges in the future. To address the multitude of hazards in the short and long-term, the District has developed Hazard Mitigation Plans and partnered with regional agencies to develop solutions to complex regional water challenges. While the challenges this District faces truly are formidable, we give them credit for working to take them head-on.

The Louisiana Local Government Environmental Facilities and Community Development Authority (LCDA) helps political subdivisions finance environmental projects. The bond will finance the construction, repair, and expansion of street and drainage improvements in the City of Crowley (pg. 1). Crowley’s Sewer Revenue Fund will be used to refinance the bonds. However, the City has struggled to adequately finance this Fund in the past, prompting an increase in user fees (pg. 113 of Appendix C). The City faces significant flood and hurricane risk, ranking in the 92nd percentile nationally for expected property losses from combined risks. The POS notes that Hurricane Delta in 2020 caused severe damage and flooding in the region and cost the City around $300,000 for cleanup efforts (pg. 14). Additionally, by 2040 under RCP 8.5 the number of days with a max temperature above 90°F is expected to increase 75-100 days while the percent of months in the 30 year period with moderate drought ranks in the 97th percentile nationally.

Urban water infrastructure is increasingly vulnerable to the effects of climate change as flooding may overwhelm sewer systems. This presents not only physical but also health hazards to the community—which already exhibit high social vulnerability (Social Impact Score of 92). Across the US, deteriorating water infrastructure burdens low-income and minority communities. However, access to state and federal funding for infrastructure improvements proves challenging for less affluent communities like Crowley (Poverty Concentration Score of 90). Though Louisiana recently voted to allocate $275 million to community water and sewage systems, governments that could cover more of the cost were more likely to receive funding (the City nor its County were recipients). The State is expected to receive more than $100 million for water infrastructure through the EPA’s State Revolving Fund, though the allocation of this funding to local governments is still uncertain.

Located in Broward County, Florida, Oakland Park is home to ~42,000 citizens within the Miami-Fort Lauderdale-West Palm Beach Metropolitan Area. The $14 million in proceeds will be used to facilitate improvements to several buildings and recreation areas citywide, including renovations and new constructions to fire stations, parks, and the City Park Library (pg. 15). Oakland Park is experiencing a boost in redevelopment projects alongside its neighboring city, Wilton Manors. In recent years, climate change has dealt a heavy hand to the area. November 2020 brought Tropical Storm Eta and record flooding that left many residential and recreational areas submerged. Last year, The City (Flood risQ Score 4.2) was met with more rainfall that left behind flooded infrastructure and stranded motorists. Oakland Park is 97th percentile nationally for property losses from combined physical perils and 98th percentile for GDP impairment. Hurricane risk is very high as well, with hurricane flood ranking 98th percentile nationally and hurricane wind at 99th percentile. Investors should consider the VaR metrics along with historical context. In 1926, damage from a hurricane forced the City into bankruptcy. Luckily, the POS mentions the Climate Action Plan proposed by Oakland Park and Wilton Manors (pg. 17) that present two overarching goals: reduce GHG emissions by 1% each year through 2028 and increase resilience of communities while minimizing climate impacts to business operations. 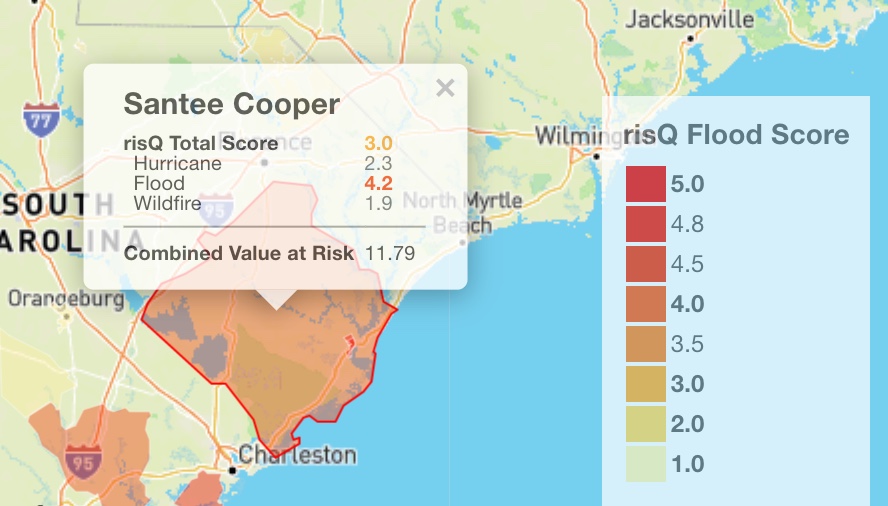 As one of the largest public utilities in the country, Santee Cooper provides and distributes wholesale and retail utilities to customers across the state of South Carolina. The System serves ~2 million people in all 46 counties. In 2020, kWh energy sales were 65.5% to wholesale customers, 18% to industrial customers, and 16.5% to residential, commercial, and others (pg. 32). Given its presence, it is disheartening to see Santee Cooper’s inability to disclose climate vulnerabilities to investors and customers within their 200-page POS. The word “climate” is mentioned only once in a boilerplate paragraph (pg. 51). For perspective, “biblical” amounts of rain fell across S.C. for 4 days in September 2015. The damage totaled ~1.5 billion. September 2018 brought Florence and ~57,000 power outages. According to the South Carolina Emergency Management Division, a typical year sees over 5,000 wildfires, which burn around 30,000 acres. If you’re familiar with recent wildfire seasons you are aware that we are no longer in typical times. Again, only one mention of the word “wildfire” in the same surface-level paragraph in the POS. Their website has plenty of buzzwords on investing in “Green Power,” but doesn’t define why.

Santee Cooper has been criticized for not addressing climate change and pollution in the past. Fortunately, they highlight emission reduction and the importance of energy diversity. As of today, sustainable resources account for only 5% of the Utility’s fuel diversity (pg. 42). According to their 2020 Integrated Resource Plan (IRP 2020), they want it to be 18%, with coal usage at 20% instead of 52% currently. At 96th percentile nationally for per capita emissions, responding to Carbon Transition Risk could be the make-or-break decision for the Utility as a national leader.